My first meal ever in Japan was a bowl of Abura Soba.  I woke up mid-afternoon from a jet lagged nap and wandered down to Akasaka Mitsuke to a busy little shop I spotted the previous night.  I walked into the restaurant, flashed a number one with my index finger, and started heading to my seat when I was stopped by the store employee who was pointing to a ticket machine.

I had no idea how these things worked at the time and even less idea of how to read Japanese!  So, I put my money in the slot and just did an ‘eeny meeny miney mo” deal, and out popped a ticket.  The store employee read my order to the noodle chefs behind the counter, and I felt a bunch of eyes turn to look at me.  I supposed they could see the scarlet letter “F” on my head.. “foreigner,” but it wasn’t.

I sat down and waited for my hot bowl of noodles.  After a few minutes, the chef put a HUGE bowl of dry noodles in front of me.  I stared at it wide-eyed getting full just looking at it.  (Apparently I ordered the Double XL bowl!)  So I picked up my chopsticks with a “can do” attitude and was about to dig in when the chef cried out “ehhhhhhh!!!!” and threw his hands in front of my bowl.  He started explaining something in Japanese when I looked at him cluelessly and finally muttered, “I’m sorry – I don’t understand.”  Then without missing a beat, he switched to English and miraculously pulled out instructions explaining how to eat Abura Soba.  Apparently I was about to commit the huge taboo of not adding the appropriate sauces and mixing it all together before eating it.

I only made a teeny dent in the huge bowl of noodles even with my most ardent effort. When I stood up, the chef seemed so disappointed and said, “it’s too much?”  And being as full as I’ve ever been and with many eyes looking at me, I sheepishly replied, “…yes…”  I felt so bad to throw away so much food, which I could tell was looked down upon.

I left, relieved to have experienced my first meal in Japan.  What did I learn?

19 thoughts on “Rules of Ramen at Abura Soba”

noun. a Japanese term for a souvenir associated with a particular locale or region, often a sweet or other type of edible, to be shared among coworkers, friends, or other group members 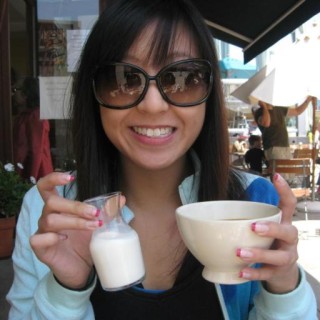 Hi! I'm Jennifer. This happy space is devoted to my foodie and DIY adventures - recipes, sweet finds, crafts, and the parties planned around the people I love. Come join my little party!

Lookin’ for something special?